When traveling anywhere with my family, on business, or alone, I always try to go to as many breweries as possible. It is a way that I try to support small local businesses. Driving almost anywhere in the country, you are sure to pass by a brewery or end up in an area with a couple of breweries within a short distance. In some regions of the country, (Philadelphia, southern California, Denver metro area) there are so many breweries visiting them all would be difficult or close to impossible. However, there are other regions that have almost no breweries. Southwestern Florida is one of the few remaining beer deserts unfortunately. I drove my small family down to the Fort Myers / Naples area of Florida to visit the in-laws, so the boy could see his grandparents. In case you aren’t a geography whiz or have never been to Florida, Fort Myers is two hours south of Tampa and north of Miami but near the gulf coast…so no where. Despite this region being a beer desert, I was still able to visit two different breweries.

The first of the two breweries I went to was Fort Myers Brewing Company. FMBC only opened 10 months ago, and is pretty small on the interior but looks awesome. There is a central bar with draft beer, furniture made out of palates. They are an ambitious little brewpub with about a dozen beers on draft, while I was there they had a randall setup filled with mangos. I had an Amber ale, an IPA, a black IPA, and a cream ale. The beer was decent, the atmosphere was nice and the sneak peek I took at their setup in the back was pretty cool. Makes my own fantasy of opening a brewpub seem more doable somehow. Even though they are less than a year old, they have already undergone some expansion and quadrupled their production capacity. Impressive growth for such a young brewery. An advantage of existing in a beer desert I suppose. I wish them continued success. I look forward to checking in on them the next time I’m in the region visiting in-laws. 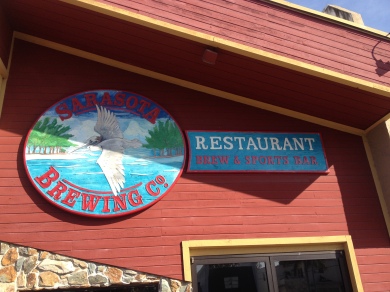 The second brewery I visited was a rerun of sorts for me, Sarasota Brewing Company. I had been there years before on a similar errand of familial obligation but thought I’d go there again since I was in the area. I had a flight..by the way…all brewpubs should be required by law to offer beer flights. My opinion but I am 100% correct in this. 6 beers, 4 ounces each, $5…I love flights. The flight consisted of (as it appeared on the menu) Sarasota Gold, Sarasota Vice (Weiss), Sequoia Amber Lager, Sarasota India Pale Ale, Midnight Pass Porter, Spiced Winter Lager. I have to be honest and say that I was disappointed in the Vice as it was advertised as having “tart citrus” character. Unfortunately, not at all….it was thin and grainy. The aroma was nice and furthered the idea that it might be tart but it was a let down. The best beer in the line up in my opinion was the Midnight Pass Porter. It was listed as a Robust porter and it was appropriately sweet and not overly heavy or ashy. I liked it. The bar itself is cool if you like wood and televisions. It is a sports bar with a copper bar, about a dozen tap, some guest beers. I didn’t pay attention. Pretty cheap, decent beer, nothing blew me away though.

I attempted to go to several other breweries but it was a comedy of errors. I drove to a brewery near Sarasota brewing company called JDub’s Brewing company. I found a partially constructed warehouse with kegs inside and a fermentation chamber on its side on the floor. It clearly was not open and had not produced any beer yet, I was a few months early. I drove to Darwin’s, a nice restaurant with a brewery inside but again, I was early, they didn’t open for service for a couple of hours and I couldn’t talk my way inside. My last attempt to hit another brewery was Big Top Brewing company, which also was not fully operational yet. Another sign you are in a beer desert, there are more breweries in the process of opening than are actually open. The next time I’m in town I may have additional options to visit, but this time was a mild failure. I have done Tampa but would like to do it again the next time I pass through.

I have a couple of trips coming up and you better believe I will be hitting as many breweries / brewpubs as I can. In the immediate future I’ll be in Phoenix and then New York City. If anyone has any “must drink” in those two areas, let me know. I’ll be in Phoenix in January and New York in February. Have a safe and happy New Year.

“Everybody has to believe in something…..I believe I’ll have another drink.” -W.C. Fields