I returned to the experimental hop series of beers and brewed this blankly named hop “Lemon Zest”…I wonder what it tastes like. So far, these beers have been great. I brewed the Azacca hop saison and the Experimental Pine Fruit (both amazing in my opinion) and this one brings me to my half way point with these experimental varieties. Sticking with the old recipe with almost no variation. Trying to keep these as close to possible so I can see the hop but basically they all are 10% wheat saisons with a pale malt and a lot of hops. This one will be no different.

There is not a lot of information on this particular hop and I couldn’t find any commercial examples. From the vendor I got the following numbers.

Overall, not a lot of information and I am unable to locate a brewery that is currently producing a commercial beer that uses, let alone showcases, this hop. So it falls to me….time to brew a beer.

Mash Conditions:
Grain was mashed at 152 F for 60 minutes. pH stabilizer was added to the mash. The overall volume of the mash was about 4 gallons. Sparge was about 5 gallons at 165 F. Just over 8 gallons was collected.

Fermentation Conditions:
This wort received the yeast from the Mosaic / Simcoe Saison. Fermentation took off after a couple of days. Beer was kegged after 3ish weeks and allowed to carbonate to about 2.5 volumes.

Notes:
There is nothing to note in this brewing. It was well behaved and the final volume was predicted. The efficiency of the mash was about 75%…nothing to report. 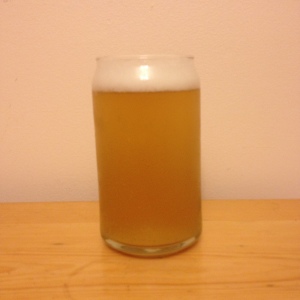 Well, the look of these beers are all the same…so it is yellow and hazy with a thin white head of small bubbles, some lacing, carbonation is a little low (my fault).

Overall, this hop is not as aggressive as I assumed it would be in either the citrus or bitterness department. This is a fine saison, the citrus / lemon character is subtle and nice, plays well with the yeast. The finish on the beer is a little dry, overall pretty good. This is probably my least favorite of the experimental hops saisons I’ve made so far…but in general I’m finding that these are not as flavor forward as I assumed and 2 ounce late addition plus 2 ounces of dry hopping are not producing very hoppy beers. Something to note in the future. The bitterness of the beer is pretty muted. I know most of the hops are late additions but the Pine Fruit saison (still my favorite from the bunch) added a notable amount of bitterness to the beer overall.

I will have no problem drinking this beer but I’ve had better saisons with better hop profiles. I don’t regret this beer and will enjoy it a lot. Probably about a 4 on a 5 point scale overall. This hop might play better with a more neutral yeast, although the citrus notes from the hop does complement the esters from the Dupont yeast.

Possible improvements (for future batches):
Well, other than using more hops or a different yeast, there isn’t a lot I can say to criticize this beer. This is another good saison in a series of good saisons that focus on odd hops. I would used this hop again as a dry hop but probably nothing else. The alpha acid content is high but didn’t contribute at all to the bitterness of the beer. Even a late addition hop at 10 minutes should have made the beer a little more bitter. A process change would be to vorlauf this beer next time to increase the clarity. I will note that I first sampled this beer when it wasn’t very carbonated and it was pretty lacking in citrus flavor. After increasing the carbonation to about 2.5 volumes, the citrus character popped and the slight aftertaste (not mentioned above) disappeared. I need to pay better attention to carbonation conditions overall. Maybe start balancing lines or getting a nicer regulator. I wish I would have brewed a similar beer that just used lemon zest to compare. I guess I should add that to the queue.

Upcoming brews:
Lots of stuff coming up here. I’m bottling the Hibiscus Brett saison and the Dandelion Brett Saison with Honey malt this month. I just returned from a trip to Chicago where I brewed a beer with a friend we called “Flowerfield Saison” (it is an inside joke a little)…that got a dose of Brett b and my house blend. He fermented his with a few different yeast, I’ll review all the variants of that in a separate post. In the queue, Russian Imperial stout, another experimental hop saison, a Belgian brown ale, an IPA, a 100% Brett IPA and a few other things planned for June. Also bottling off a bunch of Berliner and other sours…so I’ll have to refill my fermenters with those. Look for some up coming posts on yeast handling techniques and much much more beer.