Summary of My Experimental Hop Variety Saisons for 2014

I love hops. From my first Stone IPA back in 2001 to now I’m a devout hop head. This year, in order to increase my love and understanding of the dozens (hundreds?) of hop varieties available I decided to undergo a project and brew a series of simple saisons that highlight different hops and even some experimental hop hybrids from the 2013 harvest. I sourced my experimental hop varieties from Yakima Valley Hops (my favorite hop supplier). I started out the year with the ambition to do 5 varieties of experimental hops, and that increased to 6 as a few more became available. I added these hops at the end of the boil, at 10 minutes and then dry hopped with the same variety. The beers were bittered with a standard CTZ or sometime nugget hop (at 60 minutes…no flavor contribution). I kept the brewing, fermentation, and grain bill the same (or as similar as possible) for all 6 of these beers as well as the hopping schedule. This post is a summary of my experience with the different hops and my thoughts / recommendations for their use in future beers as a flavor / aroma hop.

The six hops I used this year were, Azacca, Experimental Pine Fruit, Experimental Lemon Zest, Experimental Grapefruit, ADHA 484, and ADHA 871. So a little primary information about the hop varieties to start out. Information from supplier is in italics, my notes on each of the hops are in plain text. They are presented in the order in which I brewed.

AA Range: 14 – 16%
Beta: 5.4%
Cohumulone: N/A
Total Oil: 1.8 ml/100g
Characteristics: Fresh citrus, tangerine, mango, grapefruit, piney, spicy, pineapple.
Other Notes: Sounds like this is the best-suited of this new lot (from the ADHA) for American IPAs, so it’s no surprise that it’s the first to get an actual name.
This hop is great for a late addition aroma hop, it had a nice floral character. It is relatively subtle so you can use a lot to get the right level you want. I’ve had about half-a-dozen beers that use this hop and it is distinct, easy to pick out, and seems to pair well with the Simcoe / Mosaic varieties of hops.

Alpha: 18.0 – 19.0 %
Beta: 5.0 – 6.0 %
CoH: 27 % of alpha acids
Oil: 3.10 ml/100g
Myrcene 43.00%
Humulene 29.80%
Caryophyllene 14.20%
Farnesene 0.20%
Linalool 0.40%
Parentage: Apollo, Merkur
Comments: Black currant, dark fruit, strong herbal notes, pine tree, mint, pungent, light grapefruit
rind, “Simcoe like”, “Summit like”, citrus, tangerine.
Very aromatic hop, really strong. This is probably best described as a more fruity Columbus or CTZ variety. You definitely get that earthy resinous feel from this one, like you are chewing through the beer. The pine was forward and present and probably dominated the fruit characters. This one was a lot of fun to drink. I don’t think I’d put it too close to Simcoe though, this was more earthy than that…more pungent.

AA Range: 11 – 12%
Beta: 3.5%
Cohumulone: 46.8%
Total Oil: N/A
Characteristics: Cedar, wood, bubblegum, spice.
Other Notes: Intriguing descriptors here. Sounds appropriate for English beers, or oak-aged beers.
This one doesn’t even get a name. It is a subtle simple hop. It worked OK in the context of the saison but there is nothing too special here. I didn’t dislike it, the lack of name removed any preconceived notion about what it could do, it is a fine hop. Think English beers or Noble hop variety here. Could be used in place of any of those.

A pleasant surprise and my final variety I used. This turned out near perfect for a saison. Overall a nice hop to use for aroma / late additions. It was tea-like with some subtle citrus and floral notes. I’d use it again, maybe this one will get a name.

Numbers are just numbers and you have to be pretty into hops to glean much information from those, I just include them in there so in case you do want to know the different acids and oils, there they are. People primarily are concerned with how the hops preform in the beers themselves. So I’m going to summarize my favorites, least favorites, and the rest for you right now.

Well, I’m going to continue this experiment as long as I can get my hands on experimental varieties of hops. And, from the 2014 harvest, I got 6 new varieties already. They are: Nuggetzilla, J-Lime Experimental, Chocolate Experimental, Otto Supreme Experimental, Vinnie Special Experimental, and Armadillo Experimental. I’m excited about all of these. There is going to be several differences between the six saisons I made this year and the 5 I’m going to make next year. The first being the hops, all 6 saisons described above were pellet hops, five out of the six from the 2014 harvest are leaf (Nuggetzilla is in pellets)…so I’m already starting out different. Leaf were the only form available this year, that’s fine. I’ll adapt. Second, I’m going to use the Blaugies yeast with no Brettanomyces for these new 5. I want a cleaner beer that showcases the hop better…I think that yeast is the better choice moving forward. Last, I’m going to use more of the hops and be more aggressive getting at the flavor and aroma of these hops. This means, more dry hopping, better dry hopping, and dropping the bittering addition altogether to make these truly single hop saisons. Here’s the setup.

I want to add 2 ounce of each at 10 minutes before flame-out into the wort. I am currently constructing a hop-back out of a large jar so I can drain the hot wort through the hopback filled with approximately 2 ounces of whole leaf hops on the way to be chilled but the chiller. After fermentation, the beers will be double dry hopped in a CO2 purged, dark, corny kegs. I have researched a setup that will allow me to dry hop in the keg without clogging the dip tube or utilizing a hop bag. I’m still in the process of setting this up. Basically, it involves making a metal sleeve for dip tube in the keg so the hop leaves can be in solution, floating around without a chance of them clogging the tube. I’ll build two of these kegs and dry hop in one in a CO2 purged tank under light pressure, then transfer under CO2 to a new keg with an additional 2 ounces of hops. Each 5 gallon batch will get 8 ounces of whole leaf hops in the end, all late additions and dry hopping. This will slightly increase the time it takes to make each batch (by a week or so) but I think it is important to make a more honest effort getting at the essence of this hop. I will also be transferring the beer under CO2 pressure from the carboy into the kegs.

Obviously the goal here is to maximize the hop presence in these beers. These will be CO2 purged, dark fermented, double dry hopped, single hop saisons….this is going to be incredible (I hope).

If you are in the greater DC Area and would like to be part of this experiment as a taste tester. Please contact me through this blog.

“120 million of us place the big bang 2,500 years after the Babylonians and Sumerians learned to brew beer.” ― Sam Harris 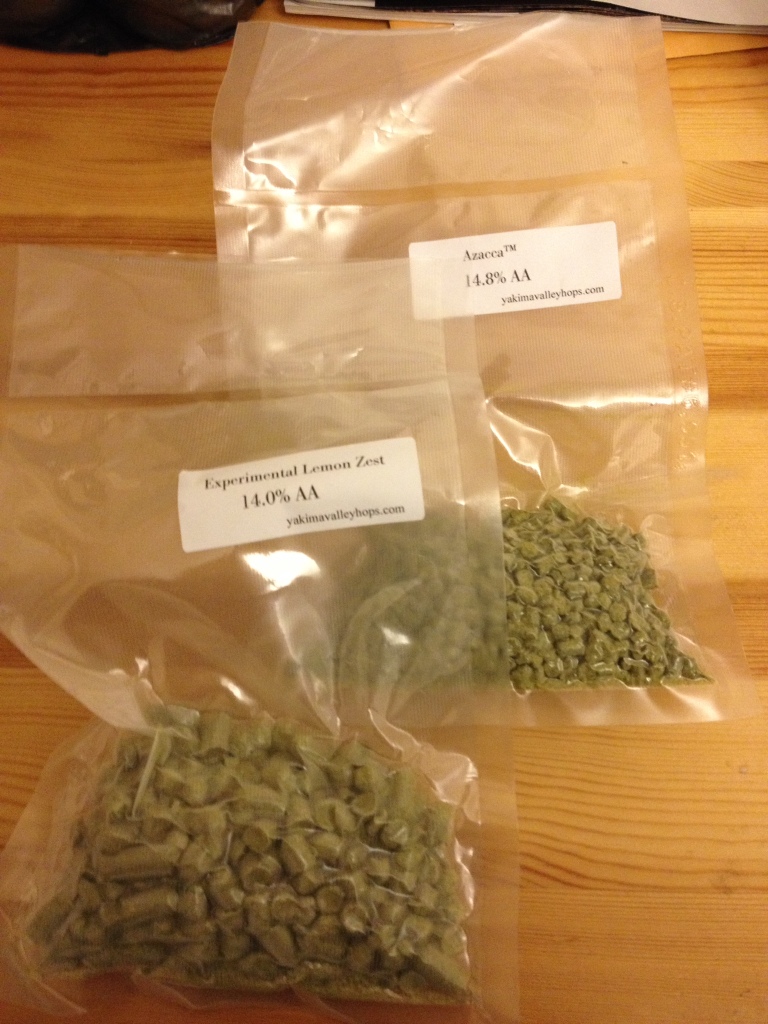