This is the first recipe I am posting on this blog even though, according to my notes, this is around the 150th batch of beer I’ve brewed. Recipes will be posted as they are brewed from now on.

About sixth months ago, I started making really simple wort using a few different base grains as my primary fermentables. The result has been a slow study of the effects of water chemistry and hop / yeast profiles without the distraction of complex malt bills. This is one of my “30% wheat” ales that utilizes primarily citra hops and a blend of several different yeasts for a uniquely hoppy and funky saison. By my own convention I am calling this a saison, even though it uses an American hop and has a final IBU much more in style with an American IPA than saison. I have a looser view of saisons than most people. The malt bill and the yeast used both point to saison, so despite the hoppy outcome, I’m going with saison for the distinction.

Mash Conditions:
Mash was 4 gallons of distilled water heated to 160 – 162. A pH stabilizer was added to the mash water (pH 5.2). After addition of grain, the final mash temperature was 152. Mash for 90 minutes, final temperature was 148. Batch sparge with 5 gallons of water at 170 degrees. About 8 gallons recovered in all.

Brewing Procedure:
About 8 gallons of wort was recovered from the mash. Wort was boiled for about 75 minutes until desired volume was achieved. Chilling was achieved by an immersion wort chiller for about 40 minutes. Beer was transferred to the fermenter by pouring the beer from the pot into the plastic carboy (provided aeration).

Fermentation Conditions:
This beer is fermented with a blend of three separate yeast strains. The dominant organism (as of this batch at least) is Saison Dupont strain of Saccharomyces cerevisiae (WLP565) as well as two strains of Brettanomyces, B. bruxellensis “trois” (WLP644) and B. claussenii (WLP645). The B. claussenii was pitched from two 12 ounce bottles of a saison I made over a year ago. The character is subtle but it shines through. Mashing at a higher temperature and fermenting longer would probably accent the Brett character of those two strains more, but I’m happy with the mix as it turns out now. There is no temperature control on this fermentation. The fermentation temperature was steady between 70° and 75° Fahrenheit. The beer was transferred to another carboy after 7 days (the fermentation was mostly done) and a new wort was placed on the yeast cake (see post for Recipe #2). The sediment from the second carboy was stored for a future beer as well.

Notes:
Beer was racked into a secondary fermenter after one week to assist in washing the yeast and to free up a fermenter for another batch of beer (to reuse the yeast cake from this batch). The hope was this would improve clarity as well. This apparently did not work (see below). 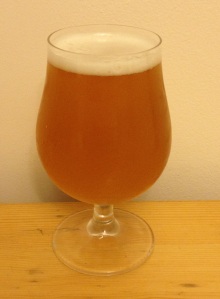 Beer served in a tulip glass. Beer is yellow and hazy with a thin, soft white head of small bubbles. Decent lacing, moderate to low carbonation.

Aroma is hoppy and strong with a nice fruity, earthiness, a lot of simcoe coming through but already reduced from the first day. Some yeast breaks through as well.

Beer is light in body, watery and not dry. Moderate bitterness on the back end of the beer. Spicy with great fruits up front and a nice finish, no aftertaste. An enjoyable beer overall.

I like this beer a lot; it will make a nice daily drinker. Light and not too dry with a decent amount of hop character and bitterness. I can see myself drinking this a lot. Up next is a Chinook version of this beer. Hopefully just as good.

I guess the thing that I’m most concerned about is the clarity of this beer, although I don’t care too much about that. I made no effort to increase the clarity during the brew and I know I should expect there to be some haze with >30% wheat in the grain bill, I just didn’t expect this much haze. Especially since it was a relatively clear beer going from the second carboy into the keg. I guess that would point to chill haze or haze from the dry hopping itself. Oh well, it is a superficial concern, but nevertheless it is something I have to look out for in future batches.

The yeast character still shines through beyond the aggressive hop character of the beer. I think I can get away with less hops in the future to make this a better drinker and to allow more of that yeast to shine through. If I want to accent the Brett character more over the Sacc, mashing at a higher temperature could achieve that as well.

Overall, I don’t have many complaints about this beer. I will thoroughly enjoy drinking and sharing this beer until the keg kicks and I have to move onto another beer.

“Work is the curse of the drinking classes.” — Oscar Wilde