I am excited to start this series of beers. I will be brewing a total of 6 of these hoppy saisons with different experimental hop varieties I picked up from Yakima Valley Hops a little bit ago. These are going to all have the same grain bill and brewed as similar as possible. One of the reasons why I’ve brewed the same beer over and over again is to get this process down to near surgical precision to do this comparison. I will brew these in batches of two…each beer will get their own post and hopefully I can write a summary post at the end of this experiment with my notes and some bottles I saved to give an overview of the experiment. I want to turn these over quickly so if you are in the DC area and would like a growler of one of these, contact me…I can make that happen.

Azacca hop is the only hop I’ll be using in this experiment that has  a name…also commercial examples. There are a few beers currently being produced using this hop. Most notably is the Victory Brewing Company beer Ranch IPA. Ranch IPA is an imperial IPA made with Mosaic and Azacca hops and is “climbing the charts” on beers that matter to a bunch of beer tickers on the internet (see beeradvocate or ratebeer for this particular species of creature….or just hang out with me). Mosaic is such a stellar hop (see Recipe 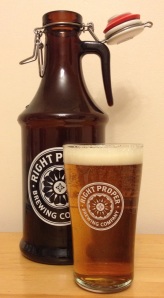 #07) that I fear it might have overshadowed the Azacca in that beer so I sought out an Azacca single hop beer.

A second commercial example I was able to snag was from the NEW brewery in the Shaw neighborhood of D.C. called Right Proper. The beer is called “Range Life”…and is a hoppy wheat meant to showcase this hop. I quickly grabbed a growler of it and drank it the night before brewing this beer…just to see what I was getting myself into. A quick beer review, beer served out of a growler into the proper glass. Beer is yellow and clear with moderate carbonation and a white head of small and medium bubbles, some lacing, decent retention. Aroma is almost peppery, it is hard to tell if that is the hop or the yeast. The beer is sweet with a floral note, not a lot of fruit in the palate like the Hop Ranch from Victory, finish is mildly bitter. Overall a decent beer but not one I would describe as “hoppy” exactly. Which is fine, my expectations from this hop is a mild floral character with possibly some spiciness / pepper to it.

This experience is slightly at odds with the description used by hop farms that this variety is coming out of, I am not conflicted about this hop but I have some and it will be used. The description I got from Yakima is below.

A quick update, I wrote the above paragraphs shortly after this beer was brewed, not really thinking of returning to it or editing at all. Since then I have seen Azacca hops EVERYWHERE. A little surprising but it has helped me crystallized my thinking of this hop. As you can see in the menu, this is definitely the “it” hop this season with two beers on the menu at a local pub that use this hop. The beer that sealed Azacca’s fate with me was Grizacca from Oxbow brewery in Maine. While my wife did not like this beer as much as I did, this was a very hop forward beer. It was sweet and floral, like a field of flowers. Not as much fruit as advertised with this hop but a nice palate never-the-less. I can see how this won’t be a hop for everyone but it can be used to make a good beer for sure. Well, enough about other people’s beers. Time to make my own.

This will be the grain bill for all 6 beers.

Brewing Procedure:
This was as straight forward as a beer gets. The beer was brought to a boil quickly and kept at a rolling boil for 60 minutes. Nothing other than the hops (described below) was added to the boil. It was a vigerous boil and too much of the water boiled away, other than that this was textbook. Beer was chilled by an immersion chiller in about 40 minutes.

Fermentation Conditions:
Fermentation was carried out by the addition of the yeast cake from the Nelson saison that was previously saved for future batches. I’m going to have to figure out where I got my cultures crossed but this is the culture that will be used for these hoppy beers. Mashing at a lower temperature and fermenting quickly will minimize the Brett character. Fermentation took off after 12 hours and finished out after about 10 days.

Notes:
Well, I sort of messed up, which sucks because this was the first one of six but this boil got out of control. I kept it at 60 minutes but I still boiled off too much. I will watch the future batches closer. Hops were added to the keg in a hop bag and the keg was carbonated at room temperature for about a week before dropping the temperature down. 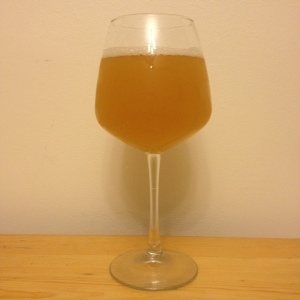 Here is the word I want you to associate with this hop…lemongrass. OK, that is out of the way, moving on.

Beer is served in a stemmed glass. Beer is yellow with a thin white head (it is slightly undercarbonated), with mild carbonation, low lacing, low head retention.

Aroma is floral, sweet, no real fruit or pine, mostly field of wild-flower in this one, lemon grass.

Beer is light with a wet finish, overall the beer is moderately to lightly bitter. The saison yeast cuts through nicely and the brett character is minimal.

The hop character of this beer is more subtle than I hoped but overall it is nice. The flavor components of this hop is lower than expected so in the future I will (and would recommend) doubling or tripling the amount of hop I used. The hop gives this beer a nice floral sweetness, it is a nice hop for a light beer such as this. No pine, mostly floral and citrus.

This hop isn’t spicy, the dominant flavor here is a lemon-lime / grassiness. Sort of like lemongrass but with more lime. It is a nice flavor and pairs well with the yeast blend. After sharing and distributing this beer to a lot of people (at the DC Homebrewer’s meeting and a few friends) the most common comment I get concerns the light citrus flavor and the earthiness (which I what I think I call grassiness). I would brew this again, but perhaps with more late addition hops. A nice beer overall.

Possible Improvements for future batches:
Well, I made a small mistake during the brewing process of allowing too much of the wort to boil away, resulting in less than 5 gallons of beer but that isn’t exactly a bad thing, just means the final beer was a little heavier in alcohol. For the purposes of comparing these beers it is probably important to keep things as similar as possible so I will pay closer attention. Not sure this is a good stand alone hop honestly, probably won’t make many SMaSH beers that showcase this hop alone. It is pretty subtle, although this beer turned out well. It would pair well with many other hops I think and I will try that in the future.

Upcoming brews:
Well the very next brew is sort of the brother of this beer. I brewed another experimental hop beer right after this one and it is currently dry hopping and carbonating in the keg. It should be ready soon. The hop used in that beer is simply called “Experimental Pine Fruit”….so I’m hoping it is pine forward. We shall see. Also in a fermenter as of this post is a breakfast stout (what??!?! That doesn’t sound like a hoppy saison!) which will be a nice change of pace from all of these light, hoppy beers. Also several gallons of old berlinerweiss was just bottled up, they are conditioning currently so a post on those should be up in a month or so. A few other things in the planning stages, likely brewing a citra or simcoe saison this weekend since the mosaic is about to kick…all good things coming.

“A man who lies about beer makes enemies” ― Stephen King