Making all those hoppy saisons, over and over again, was in preparation to make these experiment hoppy saisons with a six different varieties this year. I ordered the hops, 4 ounces each, from Yakima Valley Hops, if you aren’t using them, get on it. About a week ago, I posted the first of these, the Azacca saison. That beer turned out nice, lemon grass…lime flavor from the hop with a nice follow up of the yeast character from the low Brett blend of house saison yeast blend. Definitely a unique flavor as far as hops I’ve used personally goes. So far so good with these new hops, looking forward to getting these made. This is the second of six experimental hop batches. This was brewed a week after the Azacca saison. The goal here is to learn more about these new hop varieties, and hopefully make a good beer. This hop was labeled by Yakima Valley hops as “Experimental Pine Fruit” (details below).

AA Range: 18.0 – 19.0 %
Beta: 5.0 – 6.0 %
Cohumulone: 27 % of alpha acids
Total Oil: 3.10 ml/100g
Characteristics: Black currant, dark fruit, strong herbal notes, pine tree, mint, pungent, light grapefruit
rind, “Simcoe like”, “Summit like”, citrus, tangerine.
Descriptors I like in this one “Simcoe-like” and “pine tree”…honestly pine used to be a big component of hoppy beers (American IPAs) when I first started out in the early 2000s, but that flavor has been supplanted by the citrus / passion fruit variety of hops. It is quite hard to find a piney beer these days that doesn’t have spruce tips in it, and that’s not OK…just stop. Some of the piney IPAs have been made in such a way to emphasize the accompanied dankness / sulfur qualities of the hops, which is fine but I’m hoping this is pretty pine forward without huge amounts of dankness. There are nice hop varieties that have that character, I’d love to see a revival of that flavor profile. So my hopes are high with this batch.

Mash Conditions:
Beer was mashed at 152 F for 60 minutes, pH stabilizer was added to the mash water (a little less than 4 gallons total). After draining, the mash was sparged with 5 gallons of water. A little more than 8 gallons was collected after sparging.

Notes:
The only note I can comment on this batch is that the volume was slightly more than the Azacca saison because I watched the boil better and the fermentation took about a week longer (but some of that was laziness). I don’t know how much those two factors affected the outcome of the beer but as precise as I attempt to be, every brew day is an adventure of variability and every batch will always be a little different. 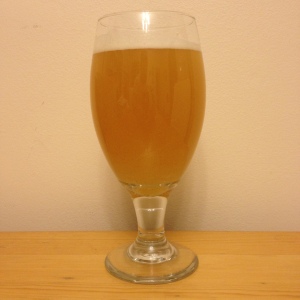 Beer served in a stemmed glass…beer is amber and really hazy (although this is a pretty early pour and these beers tend to get clearer as time goes on and I do nothing for clarity these days). Small white head, decent retention, some lacing, low carbonation (but this will also increase slightly over the coming week or so).

The aroma is really forward…almost overwhelming. It is PINE NEEDLES (YES!!!) and grapefruit with a slight mild floral character and definitely some dankness / sulfur you can get from a few hops at times. Really prominent aroma, I can’t state that enough here….very aromatic.

Beer is light and finishes a little drier than previous batches. The hops are the dominant flavor here but there isn’t a lot of bitterness on the back end. This beer turns dank pretty fast on me. The pine character falls away in the mid-palate and gives way to the sulfur / earthiness. The forward flavor is all grapefruit, which is nice. I think the grapefruit and pine are the winners of this beer by a lot.

Overall this is a nice beer, a little dryer than anticipated but since the overall hop bitterness is low it isn’t too much of a problem. I might post an update to this if the beer clarifies or the hop character changes significantly, but also look for reviews of this beer by people other than me (that receive growlers of this) as comments on this post.

Possible Improvements for future batches:
Well, much like the Azacca beer, this one is really growing on me. I think it started out in a good place and will only continue to get better. If anything, this beer is so hop forward, that it might turn off people that don’t like to chew their beers. I personally love a resinous beer and the pine character really shines through, giving me what I fantasized about when first contemplating this hop. If I were to make this again, I would definitely pair this hop with something else, it might go well with a CTZ base beer but you’d have to be careful that the dank did not take over. In total, this is a fine beer and a great hop and I’d definitely use it again / brew a beer similar to this again. I hope this is available for use in the future.

Upcoming brews:
Well there are four more of these coming in the coming months, although there is going to be a short break before I brew any more of these. I will likely make beers with the “Experimental Lemon Zest” and one with just a number designation (ADHA 484 or ADHA 871) next. I saved the yeast cake from this beer and am planning on making a hibiscus saison with this one, might spike some more Brett c into that beer as well…move more into the gruit side of things with a few flower beers. Currently in the fermenters for release soon is the Citra saison and a Simcoe/Mosaic Saison, but the big news is that currently in a fermenter is a simple ale made with a new yeast species, Saccharomyces paradoxis…a close relative of S. cerevisiae. It is safe to say that I’ve never been more excited about an experiment than I am about this one. Look for that post in a few weeks.

“I am a firm believer in the people. If given the truth, they can be depended upon to meet any national crisis. The great point is to bring them the real facts, and beer.” -Abraham Lincoln